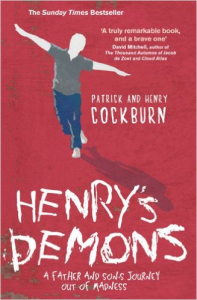 In 2011 Henry co-authored Henry’s Demons: A Father and Son’s Journey Out of Madness, which is an account of Henry’s struggle with mental illness. The psychosis first became apparent when he was a twenty-year-old art student in Brighton in 2002 and he spent most of the next eight years in mental hospitals. The book describing Henry’s experiences was extensively praised in the US and UK, the Guardian commenting that “what makes Henry’ writings so remarkable is that he remembers with precision both real events and the delusional events that accompanied them.”  Christopher Hitchens said that the writing is “intensely moving…There is poetry in this prose: the bipolarity of misery and exaltation that Blake understood.” David Mitchell, the author of Cloud Atlas and Ghost Written, wrote: “ A myth-shredding, light-shedding account explores a condition that few present-tense ‘insiders’ have ever written about.. A truly remarkable book and a brave one.” Written with his father, Patrick Cockburn, but with each author writing separate chapters, Henry describes with great vividness both his mental turmoil and day-to-day life inside mental institutions from which he escaped some thirty times. “I felt a call from the natural world to run away from where I was incarcerated,” Henry says. “The voice told me to run away, and sometime it told me to remove my clothes and go into the forest, and when I did so, the forest would come alive and speak to me.” The book includes pictures and drawings Henry did while in hospital.

The book was on a short list of three for the Costa Awards for 2011. BBC Radio 4 broadcast a play based on the book called Henry’s Demons in September 2011 in which Henry was memorably played by Tom Riley for which he received an award. BBC television bought an option on the book in 2015 with the intention of turning it into a 90-minute drama documentary.