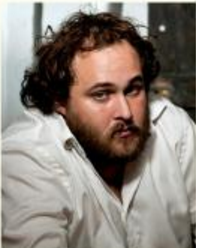 Henry is an artist and the co-author of the best-seller Henry’s Demons, a Father and Son’s Journey Out of Madness which describes how Henry experiences in mental hospital. He was born in London on 4 January 1982 and grew up in Canterbury though he also spent time in Moscow and Washington. While a student at King’s School, Canterbury he won the Pfizer Award for young artists in 1999 and later went to Wimbledon Art College and Brighton University. While at Brighton in 2002 he was diagnosed with schizophrenia in 2002 and spent eight years in mental hospitals. He continued to paint and in 2008 published an account of his experiences in The Independent newspaper. This article became the basis Henry’s Demons, written with his father Patrick Cockburn, which was published in the UK and Britain in 2011. Highly praised by reviewers in Britain and the US, the book was short-listed for the Costa prize and dramatized as a radio play on BBC4 . Henry left mental hospital in 2011 and currently lives in Herne Bay in Kent. He is completing a B.A. in Fine Art at the University for Creative Arts in Canterbury.